The BPHE is in principle constructed as a package of corrugated channel plates between front and rear cover-plate packages. The cover-plate packages consist of sealing plates, blind rings and cover plates. Connections are mounted on the cover plates and can be customized to meet specific market and application requirements. During the vacuum-brazing process, a brazed joint is formed at every contact point between the base and the filler material. This design creates a heat exchanger that consists of two separate channels or circuits.

Watch this short video showing the production steps in how BPHE's are made, from pressing plates, stacking and brazing to final testing and labeling.

Certain BPHEs are available with different types of channel plates where the herringbone pattern varies. The benefit of different herringbone patterns is that the hydraulic and thermal characteristics of the BPHE can be modified. For example, two BPHEs can have the same pressure drop on both sides despite different flow rates.

The fluids can pass through the heat exchanger in different ways. For parallel flow BPHEs, there are two different flow configurations: co-current or counter-current (click images on the right).

There are several different versions of the channel plate packages. Examples include:

There are different BPHE product categories depending on material combinations and design pressures. The standard plate materials are AISI 316 stainless steel, S, vacuum-brazed with a pure copper filler, C, or a nickel-based filler, N. For demanding applications, the plates can be made of SMO 254, a stainless steel with a higher content of molybdenum. 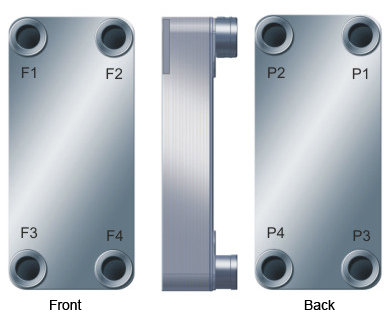 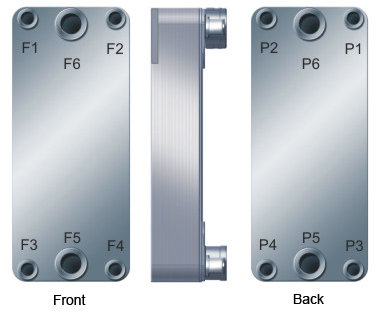 The ports are denominated F3+F1+F2+F4(+F5+F6) / P3+P1+P2+P4(+P5+P6). Please note the order in which they appear. The front is referred to as the F side and the back as the P-side. The denomination, together with the basic article number list or corresponding basic article number drawing, gives the exact location of the connections. Please also note that in addition to the connection execution, channel plate, and plate package configurations, a number of different options can be added to the basic BPHE.