The TEV strives to maintain a stable level of superheating inside the evaporator under all conditions by adjusting the mass flow of refrigerant in response Into the evaporator load. This is achieved by a membrane inside the valve housing, which compares the temperature before and after the evaporator. To be able to compare the pressures before and after the evaporator, the TEV has to be combined with another device, a bulb. The difference in pressure between the saturation pressure of evaporation and the pressure of the bulb is balanced across a membrane inside the head of the valve. Movement of the membrane controls the position of a needle and hence the mass flow of refrigerant entering the evaporator. The components of a TEV and a bulb are shown in Figure 4.2. The function of the bulb is shown in Figure 4.3. The bulb, which transmits the corresponding pressure of the superheated gas, consists of a hollow metal container filled with a refrigerant fluid. A capillary tube connects the bulb to the valve housing. The bulb is fitted in direct contact with the suction pipe, close to the compressor inlet.

This moves the needle, opening the valve orifice and thus increasing the refrigerant mass flow. The balance across the membrane is adjusted with a spring that may be adjustable manually or set at the factory. The stiffer the spring, the higher the level of superheating required to open the valve.

If the saturation pressure increases instead, the bulb will still detect an increased temperature. More refrigerant will boil off, but the increased pressure below the membrane will balance the higher pressure above the membrane. Thus, there will be no change in the needle position. The following example illustrates the bulb's balancing effect on a TEV system. An increased mass flow of refrigerant requires more heat surface area to evaporate, and therefore results in less superheating. The outlet gas temperature will therefore decrease. This in turn will cool the bulb, resulting in the condensation of some bulb refrigerant and thus decreasing the pressure on the membrane. The force of the spring will close the valve slightly, and less refrigerant will be allowed into the evaporator, again increasing the superheating. The system will soon find a balance.

There are three different types of bulbs:

A liquid-charged bulb has a large charge of refrigerant and will never "run dry". It will always contain both liquid and gaseous refrigerant. The pressure inside the bulb increases as the superheating increases, due to additional evaporation. Historically, the refrigerant in the bulb was the same as the working refrigerant in the system (parallel-charged). However, better characteristics have been achieved by using different refrigerants (cross-charged), which is now the most common arrangement.

An MOP bulb, also called gas-charged, has a much smaller quantity of refrigerant mixture inside the bulb than a liquid-charged bulb. As the evaporation pressure increases, the suction pipe will become increasingly warm as a result. A limited refrigerant charge in an MOP bulb will be totally evaporated at a predefined pressure, the MOP pressure. When the liquid refrigerant mixture has boiled off, the pressure inside the bulb will not increase greatly even if the evaporating pressure does. The needle valve will not open further, thus limiting the maximum mass flow through the valve. The reason for this is to protect the compressor from electrical overload, especially during start-up when the evaporation pressure can be much higher than under normal operating conditions. A disadvantage of the MOP valve is that the bulb always has to be colder than the valve housing to prevent the limited refrigerant charge from migrating and condensing at the membrane surface. If the MOP bulb were instead warmer than the valve housing, the MOP valve would close even if the operating pressure were well below the maximum operating pressure.

TEVs may also have an adsorption charge, where the bulb also contains a solid adsorbent such as charcoal or silica gel. The adsorbed refrigerant reacts more slowly to temperature changes than direct-charged bulbs, and gives a slower response. This can sometimes help to stabilize oscillation tendencies. However, adsorption-filled bulbs work best over a limited range, which is why they are often specially designed for the operating conditions.

The maximum refrigerant flow through a TEV depends on the size of the valve and the pressure difference over it. If the valve is too small, the nominal refrigeration capacity cannot be reached even if the valve is fully open. The TEV is normally selected to allow a slightly higher (approximately 20%) refrigeration capacity than the nominal. However, to open the valve maximally, a higher bulb pressure is needed to push back the spring. The reserve capacity is therefore used at the expense of increased working superheating.

Influence of superheating on evaporation temperature

It is important to adjust the superheating to a suitable level. If the superheating is too small, it may cause instability in the evaporator (hunting). Excess liquid refrigerant may flow over and enter the compressor where it can cause problems such as foaming, where droplets of refrigerant enter the oil sump and are immediately evaporated. The turbulence may create a refrigerant/oil foam that disrupts operation. Excess liquid refrigerant that enters the compressor may also create pressure shocks inside the compression chamber. Liquid refrigerant droplets splashing onto the shaft will dissolve in the oil and decrease the lubrication effect. Eventually, the shaft bearing may be exposed and wear rapidly. These factors may reduce the life expectancy of a compressor considerably, although the sensitivity to liquid refrigerant carry-over varies greatly with different compressor techniques. If the superheating is too high, on the other hand, it will lead to high compressor discharge temperatures, decreasing the life span of the oil. Furthermore, a high level of superheating will require an unnecessarily large heat transfer area and/or depress the evaporation temperature, resulting in a decreased COP.

Thermal expansion valves must always operate with a minimal working superheating to achieve stable regulation. The minimum stable signal (MSS) depends on the type of TEV, the characteristics of the evaporator present and the mutual positions of the expansion valve, the evaporator and the bulb. It is therefore difficult to predict the minimum superheating for stable operation. In practice, the adjustment is made by starting operation with a stable superheating and then systematically loosening the spring until instability occurs. Choosing a slightly higher level of superheating will assure stable operating conditions.

In Figure 4.7, valve 1 is too large. With just a small increase in the superheating, the needle will open to allow a large volume of refrigerant to pass. The feedback signal is too strong relative to the increase in superheating, and the system may become unstable. It would be possible to stabilize the valve by increasing the static superheating, because the TEV line would then shift to the right, away from the MSS line. However, this would require a higher working superheating, which would lower the evaporation temperature and reduce the operating economy. Valve 2 is perfect, touching the MSS line at exactly the point of nominal load with a reasonable level of superheating. Valve 2 may still open slightly more to allow for a momentary capacity increase. Valve 3 is too small, because it can deliver the nominal duty only with increased superheating. There is also no extra capacity potential.

If there is a large pressure drop between the expansion valve and the measuring point of the bulb (e.g. if there is a distribution device in the evaporator), the difference between the measured temperature and the estimated saturation temperature will be too small. The valve will overcompensate by closing, resulting in an unreasonably high level of superheating and an excessively large proportion of the evaporator surface being used for superheating the refrigerant. At the nominal cooling capacity, the superheating will be too high and will thus occupy too much of the heat transfer area to maintain the set evaporation temperature. The total system performance will decline as a result.

The following example illustrates the discussion above. A SWEP evaporator with a distribution device is used with a TEV with internal pressure equalization. The following is assumed: 1 bar pressure drop over the fluid distributor rings, TEVAP=2°C and the TEV is pre-set at 5K superheating. The pressure immediately after the expansion valve (state 'a' in Figure 4.8) corresponds to a saturation temperature of approximately 7°C. Trying to adjust to 5K superheating, the temperature of the gas leaving the evaporator will be 7+5=12°C (state 'c'). This results in a superheating of 10K instead of the intended 5K (state 'd').

To operate the TEV with the correct measurement of the superheating for evaporators with a high pressure-drop on the refrigerant side (i.e. with distribution devices), it is necessary to use a TEV with external pressure equalization. An additional pressure tube is then installed at the evaporator outlet downstream of the bulb in the suction line. The static pressure is fed back to the expansion valve, acting on the opposite side of the membrane from the bulb. Because of this extra pressure equalization from the outlet of the evaporator, the pressure from the bulb will give a response only to the actual superheating.

The expansion valve is selected to ensure that a sufficient mass flow of refrigerant can pass while maintaining a stable and reasonable superheating for regulation of the evaporator. The TEV should function over the full operating range of the system without instability or capacity problems. Different manufacturers use different recommendations, but a TEV size allowing 20% over the nominal capacity is normally selected.

Important data to take into account when selecting an expansion valve are the nominal cooling capacity, the condensation pressure and the evaporation pressure. If the evaporator is equipped with a distribution device, its approximate pressure drop should also be noted. The required pressure drop over the TEV is calculated as follows.

The expansion valve is pre-set with a static superheating based on a nominal condensing pressure. If the system condensing pressure is higher, the pre-set static superheat will become lower and vice versa. The nominal capacities of the TEVs are displayed in selection tables for the pre-set static superheating and a nominal level of subcooling. Again, if the subcooling of the system exceeds the nominal value, the tabulated cooling capacity should be divided by a correction factor. Always read the technical information from the TEV manufacturers and follow their instructions.

The nominal cooling capacity of the evaporator is determined by the balance between compressor and evaporator performance. 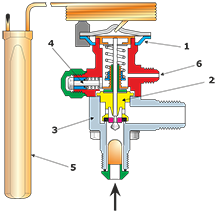 Figure 4.3 The effect of the bulb on the membrane inside the TEV.

Figure 4.4 The correlation between the amount of capacity being used and the amount of superheating this causes in the evaporator. 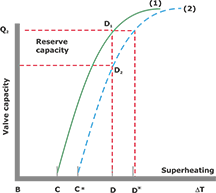 Figure 4.5 The valve characteristics before and after changing the static superheating by tightening the regulating screw of the valve. 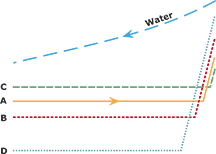 Figure 4.7 The influence of valve size on stability.

Figure 4.8 Pressure drop caused by a fluid distribution system in the evaporator.