Capillary tubes are the simplest of all refrigerant flow controls, with no moving parts. They normally consist only of a copper pipe, diameter 0.5 to 1.5 mm and length 1.5 to 6 m. The expansion function is caused simply by the pressure drop induced by the long, narrow tube. The mass flow through the tube depends on the pressure difference between the condensing and evaporating sides.

Capillary tubes can be found on small, high-volume commercial systems such as household refrigerators, but can also be used for larger systems if the operating conditions are relatively stable. The capillary tube is vulnerable to clogging, which is why a filter drier and filter are normally mounted before the inlet. A refrigeration system with a capillary tube installed is shown in Figure 4.11.

The refrigerant charge must also be carefully considered for capillary tube systems. An overcharged system will back up condensate into the condenser. This will eventually flood the condenser totally if the overcharge is sufficiently large or if there is a large change in operating conditions. Undercharge, on the other hand, will result in starvation of the evaporator, with hunting as a result.​ 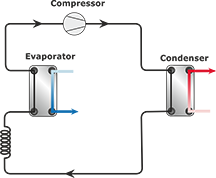 Figure 4.11 The refrigerant cycle with a capillary tube installed.