The means of expansion for flooded evaporators differ from those for direct expansion (DX) systems (see chapter 6, Evaporators​). Most common are refrigerant flow controls of the float type. A refrigeration system with a low-pressure float valve is shown in Figure 4.16. Figure 4.17 shows the details of a low-pressure float valve. The low-pressure float valve controls the liquid level, and is normally mounted in a chamber parallel to the liquid/vapor separator. For thermosiphon systems, this modifies the effect of the force of gravity, which drives the refrigerant into the evaporator. If the level of refrigerant in t​​he separator increases, the valve will close and vice versa. Balance is maintained when the refrigerant flow into the evaporator is equal to the vapor flow from the evaporator. For forced circulation systems, the circulation pump will control the degree of evaporation.

Instead of using a mechanical connection between the float and the needle, it is possible to connect the float to an electronic switch that controls the flow via solenoid valves. The function is the same as described above.​​​​​​​​​ 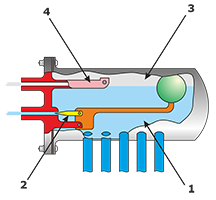