All engines use oil as a lubricant, to seal off the compression chamber and to reduce piston wear and friction. The friction and the heat from the combustion heat the oil, reducing its viscosity. If the oil temperature becomes too high, the low viscosity will render the protective oil film too thin for effective protection and sealing. The result will be increased wear on the moving parts, reduced efficiency for the machine and a shorter lifetime for the oil. The excess heat in the engine oil must be removed efficiently, for example with a BPHE.

All internal combustion engines are heat engines and thus have a physical upper limit on their efficiency achieved only by the theoretical Carnot heat engine. A few internal combustion engines use a rotary piston motion instead of the common reciprocating type. These engines, called Wankel engines, are also known as Orbital engines or Quasiturbines.

The parts of an engine vary depending on its type. The most common engine types are 4- or 2-stroke internal combustion engines. The key parts of a 4-stroke engine include the intake and exhaustvalves. A 2-stroke engine may simply have an exhaust outlet and a fuel inlet instead of a valve system. Both types of engines may have one or more cylinders, each with a spark plug, a piston and a connection to a crankshaft (see Figure 7.1). A single sweep of the cylinder by the piston in an upward or downward motion is known as a stroke. The downward stroke that immediately follows the ignition of the air-fuel mix in the cylinder is known as the power stroke.

All internal combustion engines depend on the exothermic chemical process of combustion: the reaction of a fuel, typically with air though other oxidizers such as nitrous oxide may be employed. 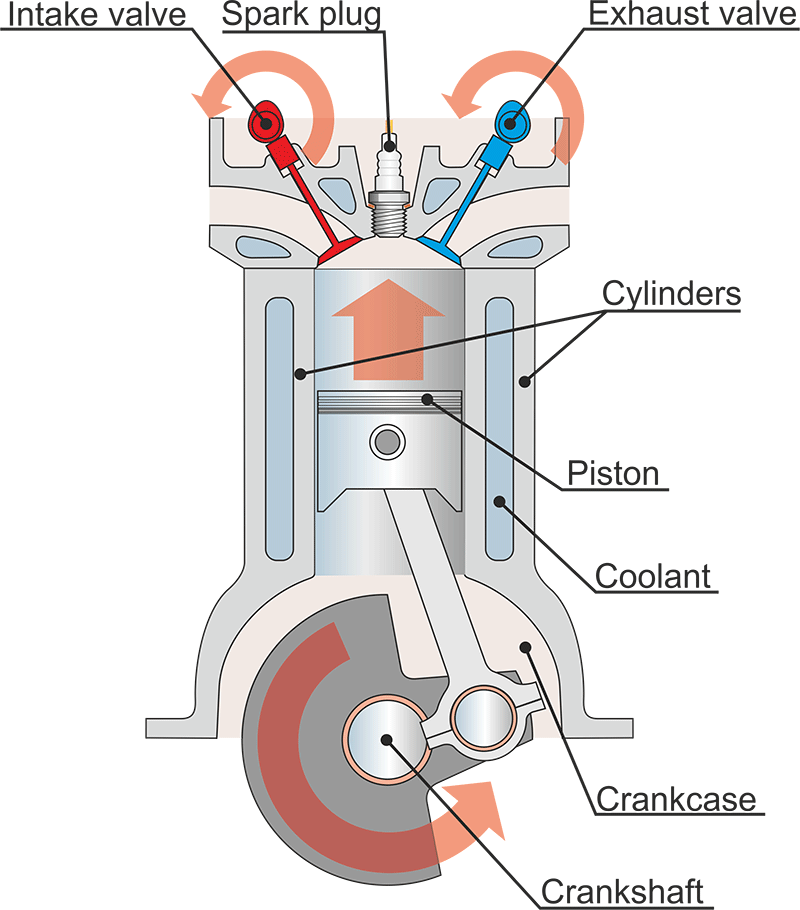 Figure 7.1 The moving parts of a 4-stroke engine, which cause friction and heat. The four strokes of the cycle are:

2. Compression: Then the piston moves back up to compress the fuel/air mixture. Compression makes the explosion more effective.

3. Combustion: When the piston reaches the top of its stroke, the spark plug emits a spark to ignite the gasoline. The gasoline charge in the cylinder explodes, driving the piston down.

4. Exhaust: When the piston reaches the bottom of its stroke, the exhaust valve opens; the exhaust gases leave the cylinder and are discharged via the tail pipe.

The crankcase contains oil for lubrication.

Internal combustion engines are most commonly used for mobile propulsion systems. They appear in most autos, motorbikes and boats, and in a wide variety of aircraft, large ships and locomotives, mostly in the form of gas turbines. They are also used in industry.

As well as meeting tough demands for accessibility and output, marine engines must be able to withstand huge stresses, depending on the load and climatic conditions. Space is a critical variable: the more compact the engine, the more space there is for cargo, and the simpler it is to carry out maintenance.

Marine low-speed (~100 RPM) propulsion engines are often 2-stroke engines operating with heavy fuel oil. High power and reliability are the top priorities for freighters. Medium- (300-1000 RPM) and high-speed (>1000 RPM) engines are mainly of the 4-stroke type and are used for passenger ships and naval vessels. High-speed engines can also be fitted as auxiliary power units parallel to the main propulsion engine.

Marine vessels are often equipped with a fresh water cooling water circuit for internal cooling. This internal cooling circuit enables the use of stainless steel plates, e.g. in BPHEs. The closed water loop is then cooled with seawater using a central titanium BPHE, e.g Minex.

4. Use of Engine Oil

Engine oil for large combustion engines is normally SAE 40 mineral oil or similar. Engine oil used in internal combustion engines is also called motor oil or lubrication oil. The properties of oil are described in Oil as a Heat Transfer Fluid. Compatibility with AISI 316 stainless steel and copper, the standard material in SWEP BPHEs, is generally good. Lubricating oil forms a film between the surfaces of parts moving against each other so as to minimize direct contact between them. This lubricating film decreases friction, wear and the production of excessive heat between the moving parts. As a moving fluid, motor oil also carries away heat that builds up at the surfaces of parts. Some heat is inevitably produced due to friction from parts moving against each other or the oil film. Apart from heat due to friction, combustion engines always produce heat due to the combustion process.

In the crankcase of an engine, the crankshaft, bearings and bottoms of rods connecting the pistons to the crankshaft are submerged in oil to lubricate these rapidly moving parts. The rapid motion of these parts also churns the oil, splashing and lubricating the contacting surfaces between the piston rings and the interior surfaces of the cylinders. This oil film also serves as a seal between the piston rings and cylinder walls to separate the combustion volume in the cylinders from the space in the crankcase (underneath the piston).

Surface wear due to the rubbing of metal engine parts inevitably produces some microscopic metallic particles. Sludge also accumulates in the engine. Such particles could circulate in the oil and grind against the moving parts, causing erosion and wear. Because these harmful particles inevitably build up in the oil, the motor oil is circulated through an oil filter to remove them. An oil pump powered by the engine pumps the oil through the oil filter.

All these stresses and strains are reasons for cooling the engine oil.

Formerly installed separately, lubrication oil systems are now being changed to compact engine-integrated cooling systems. Supply and return channels are cast into the engine block. Figure 7.3 shows a marine engine block with a mounted SWEP B65, and a marine vessel powered by three of the described systems.

Figure 7.4 shows a central cooling system for a passenger ship. It consists of central coolers in which seawater is used to cool a secondary fresh water circuit. The fresh water circuit serves several heat exchangers such as an engine lubrication oil cooler, a transmission oil cooler and a jacket water cooler. Using fresh water in the secondary circuit minimizes corrosion, scaling and redundancy in machines and equipment, and ensures smooth operation while minimizing the cost of repairs and replacements. 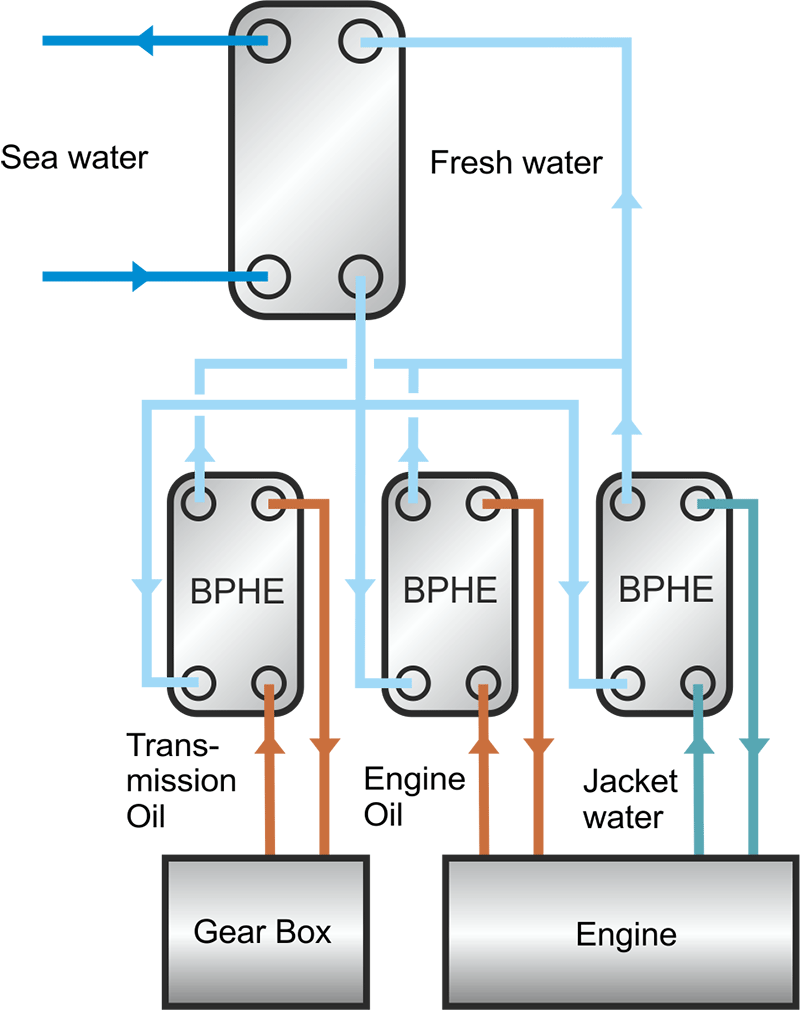 Figure 7.2 Central Cooling System with the fresh water circuit on the secondary side of the BPHEs, and the transmission oil, lubrication oil, and jacket water circuits on the primary side.

The excess heat in the lubrication oil must be removed efficiently. This can be done with BPHEs, with fresh water on the secondary side of the main BPHE and engine lubrication oil on the primary side. The heat exchangers in this system are installed separately, in contrast to the system shown in Figure 7.2. The size of the BPHE cooling the gearbox will depend on the type of transmission used, but it will usually be smaller than the engine oil cooler. Water jacket cooling is necessary on marine engines to reduce the temperature of the engine-room air space and exhaust pipe. Direct cooling with seawater is unsatisfactory, because the engine will run too cool and the seawater may ruin the cylinder blocks and heads.

Compact size and efficient heat exchange are imperative because any extra weight will reduce the power-to-weight ratio. A large footprint may also make the engine too large for the designated space. Weight and footprint are important, particularly for mobile and marine applications. However, design cases differ from manufacturer to manufacturer.

Marine applications have the overall aim of creating an even more compact marine diesel, with increased performance and versatility. Larger marine engines are all equipped with a complete engine oil system, i.e. an engine-driven main pump, an electrically driven pre-lubricating pump, a cooler, a full-flow filter and a centrifugal filter.

Figure 7.2 shows a layout for an engine lubrication oil system. The centrifugal filter is a special feature connected to the back-flushing line of the full-flow filter. This provides the means for extracting wear particles from the system. 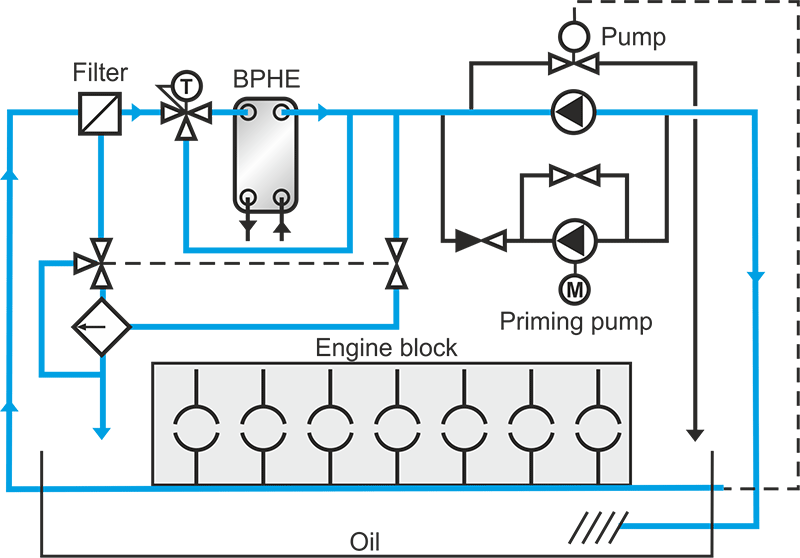 Formerly installed separately, lubrication oil systems are now being changed to compact engine-integrated cooling systems. Supply and return channels are cast into the engine block. Figure 7.3 shows a marine engine block with a mounted SWEP B65, and a marine vessel powered by three of the described systems. 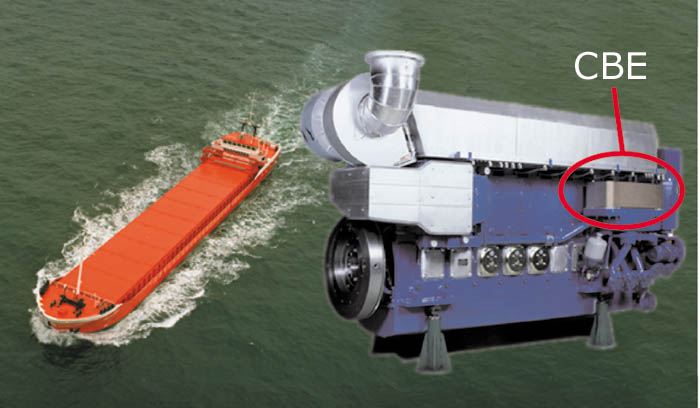 Figure 7.4 Diesel engine block from Wärtsilä (W20) with a mounted SWEP B65 for a marine vessel. (Courtesy of Wärtsilä)